Trip to the heart of Tien Shan Mountains

The Central Tien-Shan - enigmatic and mysterious place! Since ancient times people tried to penetrate into this alluring and such an unexplored region. There were legends about this area, and many spears were broken during scientific battles about its origin. Not talking only about origin, the location of some dominant peaks was a great mystery. Some local names of the greatest peaks speak for themselves. First of all, this is the legendary Khan-Tengri - the lord of spirits and the ominous Kan-Too - Bloody Mountain. Not in vain that numerous expeditions of scientists from all over the world, starting from the middle of the XIX century and up to our days, strive to discover the last secrets of the gray-haired Tien-Shan’s heart. These are the expeditions of Semenov P. P., 1856-57, later called Tien-Shanskiy for his invaluable contribution to the study of the Tien-Shan, and the Italian Prince Cesare Borghese in 1900, and a number of expeditions of Gotfrid Merzbacher in 1902-1903 and 1907– 1908, in honor of whom the unique lake at the confluence of the Northern and Southern Inylchek glaciers was named.

Lake Merzbacher was discovered in 1903 by Gotfrid Merzbacher, the German geographer and mountaineer, during his expedition aimed to reach the foot of Khan-Tengri Peak. Lake Merzbacher is located at an altitude of 3,304 m above sea level. It has a total area of 4.5 square km and 60-70 m in depth. Every year, from July to August, this lake containing 129 million cubic meters of water suddenly disappears completely in 2-3 days. There are many hypotheses why this is happening. But none of them found its full confirmation. The Heart of the Tien-Shan still remains undiscovered.

Trekking to Merzbacher lake. You will visit the unique Lake Merzbacher, which disappears once a year, while many icebergs are left at its bottom, some of them reaches 20 meters in height. Passes, glacier crossing, rivers, lakes, majestic peaks, which fascinate with their uniqueness and beauty, will be on the route.The trekking ends in the Base Camp, from which you will observe two of the highest mountains in Kyrgyzstan – Pobeda Peak (7,439 m) and Khan-Tengri Peak (7,010 m), standing third after Pobeda Peak and Lenin Peak (7,134 m). You will plunge into the life of climbers who are getting ready for summits ascents. You will be pleasantly amazed by the flight to Karkara observing wonderful panoramas of the snow-capped mountains.

Arrival in Bishkek. Meeting at Manas airport of Bishkek city. Transfer to a hotel. After rest, city tour of Bishkek - the capital of Kyrgyzstan. You will meet the not intricate architecture of the city. Visits to: the Ala-Too Square, which provides a magnificent view of the snowy peaks of the Kyrgyz Range; green parks; Manas township and much more.

Transfer to Karakol, 400 km. Swimming stop at Lake Issyk-Kul, the pearl of Kyrgyzstan. It is recommended for those who want to refresh and exercise after the long trip. Accommodation in a hotel in Karakol.

Transfer to the Inylchek Valley. The surrounding landscapes are fascinating. The road along the Terksey Ala-Too Range leads to the beautiful Turgen-Aksu Gorge and snakes up to the Chon-Ashuu mountain pass (3,822 m) where one can already feel the icy breath of the nearby glacier even in the midday. Descent to the narrow canyon of the mighty Sary-Djas River and travel further to the wide Inylchek Valley. After the border control we will make our way onward to the At-Djailoo River where we will make camp for the night. From the campsite one can easily make small hiking trips into the surrounding area. Overnight in tents

Trekking to the South Inylchek glacier tongue (16 km). Today we will have a long hike along the Inylchek River valley. Depending on water level we have to either ascent more than 150 m of the left slope and bypass the clamp or, if we are lucky, walk along the bottom of the valley near rocks. An excellent day for acclimatization. Our campgrounds are located at the foot of the imposing Nansen Peak (5,697 m), heaving over the camp by the ice-covered, almost three-kilometer-long wall. Overnight in tents.

Long hiking. Length – 13 km (4-6 hours, +200 m). . Today’s part of the trekking will go on the side moraine of the Inylchek Glacier to the confluence with the Putevodniy Glacier. After lunch we will have one more hike of pretty same distance. The route goes on the right glacier’s moraine, on smooth sand soil. The different relief and steepness of the slope adds adrenaline. Dinner in the camp. Overnight in tents.

Trekking to the Merzbacher Glade (3,400 m). Length – 10 km (approximate 4-5 hours, +300m). Today it is expected a long and complicated way. We will pass the small lake where we will stop for lunch. Those who want may bath. Then we will walk on the moraine to the Merzbacher Glade. This glade the last island of grass, located nearby the unique Lake Merzbacher. There is the scientific research station. Scientists from all over the world come here every summer to study local glaciers movements, meteorological situation in the region and the lake itself. There is enough space for tents on the vast green territory. Overnight in tents.

Rest day on the Merzbacher Glade. Excursion to Lake Merzbacher. The Merzbacher Glade is the last place on our way to the foot of seven thousand giants, which is abounded with green grass and flowers, so pleasant for eyes. Further, only the endless glacier and moraines, moraines. This day we will be able to go on an excursion in the vicinity of Lake Merzbacher, wander among the ice blocks - serac, look into the bottomless ice cracks, where endless glacial streams and small rivers noisily rush to. Do not think that the tour will be easy. So, in order to approach the lake, you have to cross the glacier through all this jumble of endless piles of detrital material brought by the glacier from its upper reaches. This is about 3 km in a very rough terrain. If such a walk seems too difficult for someone, he or she can take a rest on the glade and prepare for a further not less complicated two-day walk to the base camp.

Crossing the South Inylchek glacier. Crossing the South Inylchek glacier at the confluence of the Shokalsky Glacier. Then we will go onto the central moraine of the glacier and will move along it to the Komsomolets Glacier. On the way you will meet many glacial rivers and lakes. Some of them have to be bypassed. Throughout the journey, mountains around you will become higher and higher and you can feel yourself in the role of pioneers of this wild land. Overnight at the confluence of the Inylchek and Komsomolets glaciers is cold, so here, more than ever, you will need warm sleeping bags.

Today we will head to the base camp. We have to cross the glacier for the second time and, what is more important, to find the way on the icy bridge over the river, winding on the glacier. Further along the moraine, which leads directly to the BC, located on the confluence of South Inylchek and Zvezdochka glaciers at the foot of Peak Trehglaviy. Amazing views of Pobeda and Khan-Tengri peaks. Accommodation in the BC.

Rest day. It is possible to walk in the vicinity of the base camp to the foot of Khan-Tengi Peak (7,010 m) or Pobeda Peak (7,439 m). You have to make your choice in the evening before: hiking or rest. As for the hiking to the foot of Khan-Tengri Peak you start immediately after breakfast. However, you can walk in the direction of Pobeda Peak, towering by a huge ice wall to the east of the camp. Sunsets burn with blood-red color in the last rays of the setting sun on the slopes of these seven-thousanders and are incredibly beautiful. Of course, the atmosphere of the harsh mountaineers’ days that prevails in the camp will not leave anyone indifferent. At the foot of seven-thousanders you will feel like small, fragile creatures, burdened with small problems that are not so significant in fact. The sense of life may arise in a completely different way for you. Accommodation at the base camp.

Helicopter flight to Karkara. The main thing is to wait for the helicopter, which flies only in good weather. Therefore, all departing this day wait for him as a God(я бы удалила это предложение полностью). From the helicopter you can once again look at the path you have traveled on the glacier and be proud of what you’ve done. Because it was really worth it. Wonderful views of the Lake Merzbacher and a few dozen other small lakes on the surface of the glacier, the surrounding ice-rocky peaks will not leave anyone indifferent. From the window of the helicopter you can take great pictures all the way. Landing in Karkara, in this green paradise, brings a lot of pleasure after the icy silence of the glacier. Transfer to the village of Tamga, located on the southern shore of Lake Issyk-Kul. Accommodation in the guest house.

Flight home. End of the program. Our driver will take you to the airport. 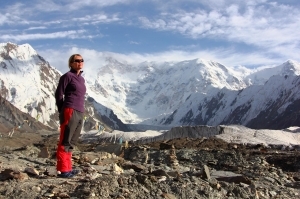 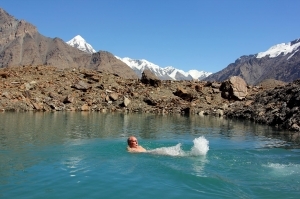 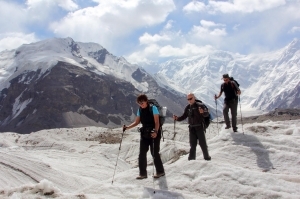 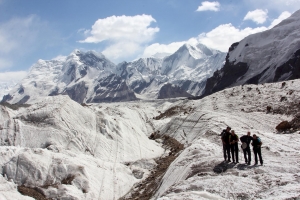 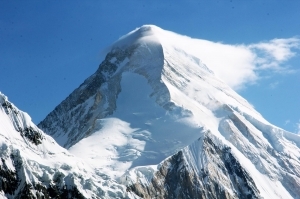 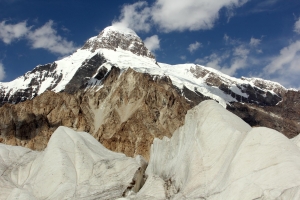 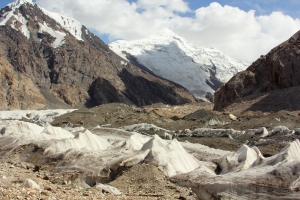 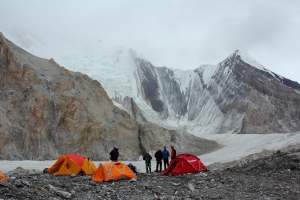 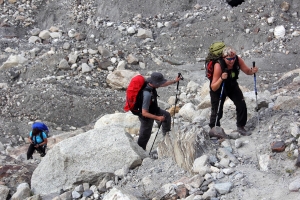 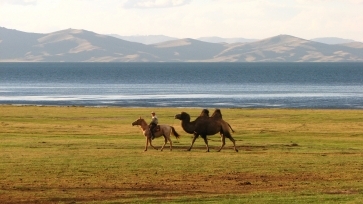