Tulips Of The Tien Shan

Spring tour to Kyrgyzstan
(Tulips Of The Tien Shan)

Nature of Kyrgyzstan is very diverse. Due to the mountainous terrain in this region one can find different types of plants growing mostly in the deserts till those which occur in the tundra. Totally in Kyrgyzstan there are over 3500 species, 89 of which are listed in the Book of rare species, such as Abies semenovii, Rhodiola linearifolia (golden root), Ordinary Bird Cherry, Kashgarian Barberry, Central Asian Pear, as well as 12 species of tulips. If we consider that the entire planet has only 80 species of tulips, you can’t deny the importance of the fact that in Central Asia there are 70 species of these beautiful flora to be found!

Today the majority believes that the birthplace of tulips is Holland, but it is not true. Of course, that’s the place we get those elegant bouquets and onion cultivars from, but the birthplace of these plants is Central Asia and it still is the guardian of wild members of this species. Tulips are ancient plants that emerged about 10 million years ago. The Dutch got them only at the end of the XVI century thanks to Ozhiru de Busbecq diplomat, served as ambassador of the Ottoman Empire, who brought the bulbs of "red lily" to the Austrian Emperor Maximilian II, and finally from the capital of Austria - Vienna professor Carolus Clusius had introduced them to Holland. Turks were first to notice the beauty of tulips; traveling with caravans along the Silk Road, on the Asian steppes and mountain areas, they brought these flowers to Europe, where even before the Dutch began to plant them in their gardens and breed and select these elegant plants.

It is a pity, but the number of wild tulips decreases every year, and it is not related to the new land cultivation, but to the ignorance and negligence of ordinary people who travel every spring for the "barbeque". Beautiful large flowers migrate to vases and fade away with their life offspring. Man, ripping off a tulip, thinks he doesn’t cause any harm, because the next year flowers usually bloom again; but none the next, nor a few years later, this bulb will not grow, and there will never be the glow red light wild flower, as all the power and all the juices of the bulb have been spent and it had to recover only after the flower bud and scatter the seeds.

Life of a tulip can be compared with human life: wild flower requires from 12 to 15 years to gain traction for flowering, then it blooms for several decades, and then the bulb fades away; at this point there is disruption in blooming. In total the whole life of a tulip goes from 50 to 70 years. Same thing happens to a human going through childhood, youth, flowering and fading, but a person for a few days of aesthetic pleasure ruins life of a beautiful creation, so similar to him. In order to let more people know about the awesomeness and beauty of this natural gift, we invite you to plunge into the charm of spring nature awakening and go with us on a photo hunt for flowers called tulip. This is comparable to the photo hunt of the king of snowy Tien Shan mountains - the snow leopard, as the tulips don’t lay as carpets underfoot, but grow mostly alone, hiding among the rocks on the high mountain slopes and in rock crevices. Who knows, maybe you will be lucky to meet such a rarity as Kaufman tulip (Tulipa kaufmanniana), Kolpakovkogo Tulip (Tulipa kolpakowskiana) or the famous tulip Greig (Túlipa gréigii). But in addition to tulips and other equally beautiful flowers on the tour you will learn about the unique nature of Kyrgyzstan and its beautiful and colorful traditions.

Bishkek – Ala-Archa national park – Kyrgyz ridge slopes. Arrival to Bishkek. Accommodation in the hotel. Rest. After lunch we will go to the hills located on the southern outskirts of Bishkek. If we are observant, we can find the beautiful Greig Tulips (Tulipa greigii), here you may also find equally beautiful tulips - Tulipa dasystemon, Tulipa kolpakowskiana Tulipa zenaidae and Tulipa kaufmanniana. In the evening, at the sunset Kyrgyz Range is very beautiful and tulips on the snowy background are more vivid, like small bonfires on the lush green carpet. Return to Bishkek.

Bishkek – Talas (350 km). Transfer to Talas valley through Suusamyr. This time of the year it starts to wake up from winter and covers with fragile first blooms. At the very time local nomads start to put their yurts and get the cattle into the valley. We will go further to Talas where we will see different tulips of Kazakh steppes. Accommodation in the guest house upon arrival to Talas.

Talas. Today we will go see the surroundings of Talas ridge at the mountain gorges and foothills. In the evening we will come back to the guest house.

Talas - Chychkan (210 km). Transfer to Chychkan gorge for accommodation in OSON lodge. In these mountain parts of the country the spring just starts to cover the ground. Trees just start to bloom and the hills start to cover with spring flowers. Upon arrival we will accommodate in the guest house on the shore of the river.

Chychkan gorge - Sary-Chelek lake (290 km). This day the road will go along the Naryn river. In this part it’s the most picturesque. At the very beginning of Fergana valley, we will turn and go to see some lakes in Sary-Chelek reserve. At the shore of the lake we will put our camp and stay there for the night.

Sary-Chelek lake. This day we will spend at Sary-Chelek. We will go to Iri-Kul lake and ascend onto panorama place. At this time, it's going to be a scene! The real spring with a great number of flowers: tulips, Peonies, irises, Eremurus and many other. Fully covered with blossoms there will be apple trees and cherry-plum trees. If you are going to call it a heaven you will be definitely right!

Besh-Aral reserve - Arslanbob (310 km). Accommodation at the guest house. Excursion to a small waterfall and a Panorama from where you may see the whole gorge.

Arslanbob. Excursion to the forest lake and the waterfall. In these walnut forests we will find absolutely different kinds of tulips (Tulipa ferganica). Return to the guest house.

Arslanbob - Kyrgyz-Ata national park (240 km) . Much of our way today will go through the populated areas of the Fergana Valley, through the city of Jalal-Abad and Uzgen. We'll have an excursion at the Uzgen minaret, which was built in the fifteenth century on the Silk Road. And then go to a new area to search for tulips in the national park Kyrgyz-Ata. Accommodation in tents.

Kyrgyz-Ata national park - Shevali gorge (170 km) . This day we will go to Shevali gorge for tulip hunting. Accommodation in the camp.

Shevali – Osh town (150 km). After morning photo, we will go to Osh city where we will spend the rest of the day. We will have an excursion to the sacred mountain Suleiman-Too and probably see tulips even there. Accommodation in the hotel.

Going home. This day the car will take you to the airport for your flight home. 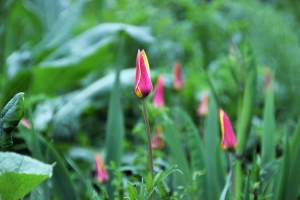 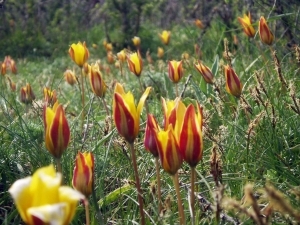 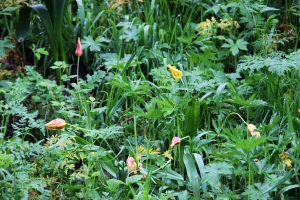 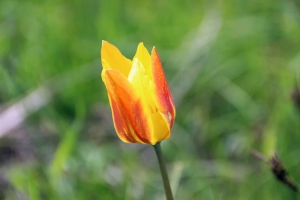 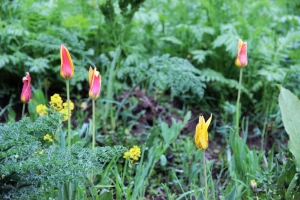 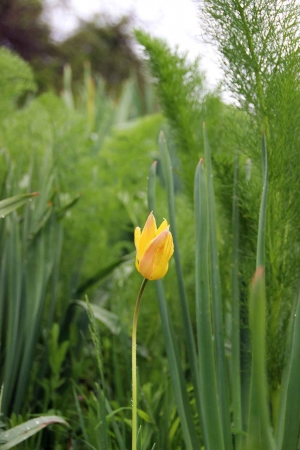 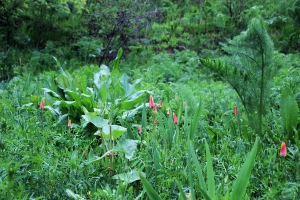 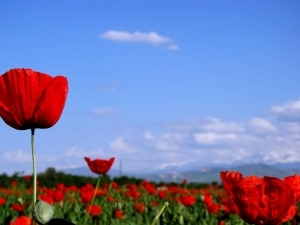 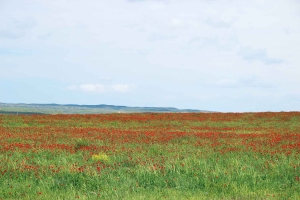 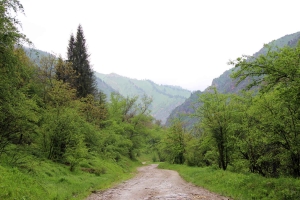 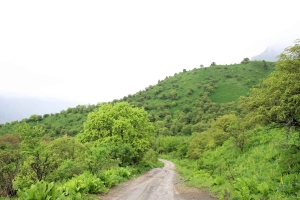 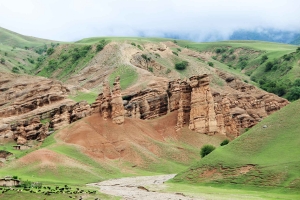 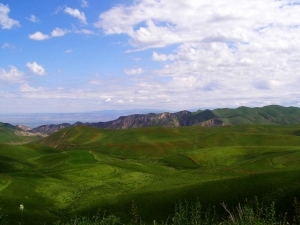 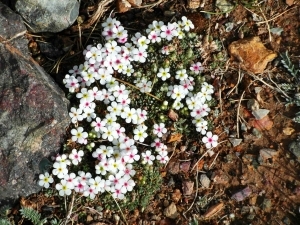 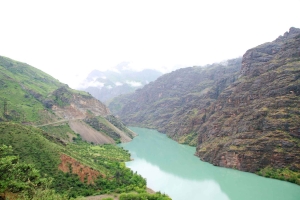 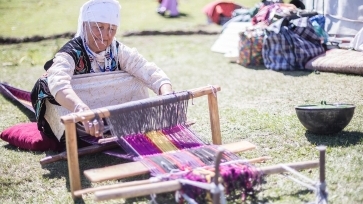 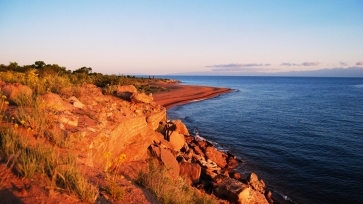 Tour around Kyrgyzstan - Through the most beautiful places 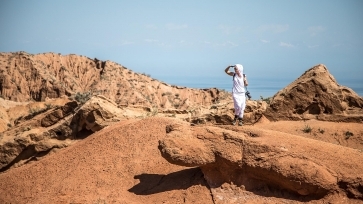 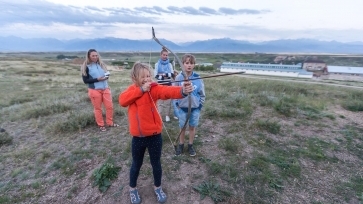